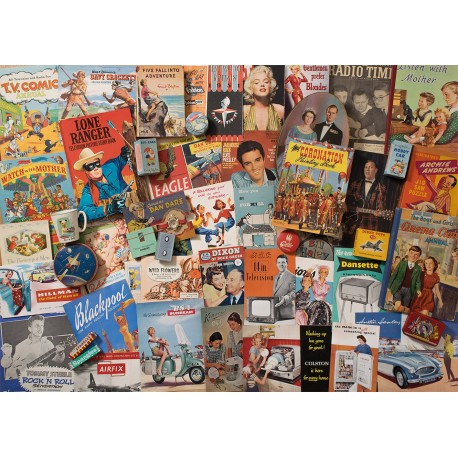 With the years of rationing rapidly coming to an end, the future looked promising. The Festival of Britain had lifted spirits in 1951 and, as the sweet ration was lifted in time for Queen Elizabeth’s coronation in 1953,

With the years of rationing rapidly coming to an end, the future looked promising. The Festival of Britain had lifted spirits in 1951 and, as the sweet ration was lifted in time for Queen Elizabeth’s coronation in 1953, the spectacular procession was watched by twenty million on television. Although few owned a television set, most knew someone who did, and by the end of the decade, 60 per cent of homes had one.

Television was a convenient new form of entertainment. Generations of children had listened with mother on the radio; now it was watching with mother – Muffin the Mule, Sooty, the Flowerpot Men. American cowboy series proliferated, but home-grown productions included favourites like Dixon of Dock Green and Emergency Ward 10. Family shows prospered, especially after Independent Television began in 1955 (along with a stream of TV commercials and those jingles). It made the presenters household names – Eamonn Andrews, Bruce Forsythe, Hughie Green.

Perhaps the byword of this era was aspiration. Men desired a motor car or a scooter with a girl on the pillion. Housewives wished for a Kenwood food mixer, a refrigerator for the frozen foods, or a Colston dish washer – “washing-up has gone for good!” Change was on its way: filter-tipped cigarettes, self-service supermarkets, sugar-coated breakfast cereals, Wagon Wheels, the convenience of instant coffee, and the dramatic new detergent washing powders with vibrant packaging.

Elvis Presley was the singing sensation from the USA, along with Bill Haley, who brought rock ‘n’ roll to Britain’s teenagers. But life in the Fifties could be simply those DIY jobs – would it be Formica or Fablon? For children, collecting Typhoo tea cards was a popular pastime, or reading the Eagle with adventures of Dan Dare ‘pilot of the future’, whose nemesis was the green Mekon – can you find him hiding in the jigsaw?
As with all Gibsons jigsaws, the beautifully illustrated pieces are made from the highest quality 100% recycled board and are therefore a pleasure to work with again and again.