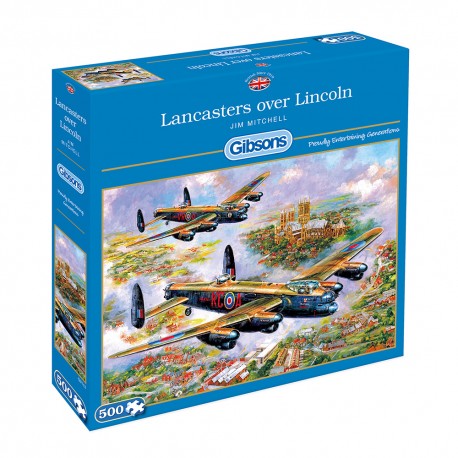 First built in 1944,  the Avro Type 694 was a British four-engined heavy bomber that later became the last piston-engined bomber operated by the Royal Air Force. In August 2014, the world's only two airworthy Lancaster bombers took to the skies at the RAF Coningsby's airfield in Lincoln, as part of a historic six-week tour. The two Lancaster bombers, fondly named Thumper and Vera.

High quality 500 piece jigsaw puzzle.
Puzzle size 35x49cm when complete.
Made from thick, durable puzzle board that is 100% recycled.
Beautifully painted by artist Derek Roberts.
Designed and manufactured in the UK.