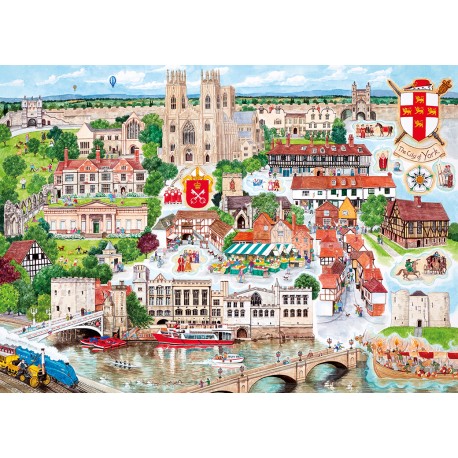 York is a historic walled city in North Yorkshire,

York is a historic walled city in North Yorkshire, England. The city was founded by the Romans in 71 AD and became the capital of the Roman province of Britannia Inferior and later of the kingdoms of Northumbria and Jórvík. In the Middle Ages, York grew as a major wool trading centre and became the capital of the northern province of the Church of England.
Nowadays, York is the hub for many services including the railway network and the NHS and is known for its eateries, music venues and century-old pubs

.As with all Gibsons jigsaws, the beautifully illustrated pieces are made from the highest quality 100% recycled board and therefore a pleasure to work with again and again